I took a picture: Lethe

WARNING: This post has nothing for anyone, it’s just me ranting about photography. Turn back now, you have been warned.

Apparently, photography is now a thing I like. It is also a thing I like a lot, so I have been doing it a lot. I’m not very good at it, but I’m blessed with not caring much about how good I am at a thing I like doing, which is apparently how you get good at things. I decided to write about photography-related things, even though I’m wildly unqualified, because I like having a sort of progression log.

A few days ago, I stumbled upon the ethereal photography of Darren Moore, and immediately fell in love. The outworldly appearance of his photographs appeals greatly to me, and I can’t help staring at them and studying them.

The natural next step, as I see it, is for me to try to copy the style of the photographs, and eventually develop my own. To do that, I try to analyze the photos and discover their components. I’m sure I’m missing lots of important elements, but the following immediately pop out to my untrained eye:

After identifying these elements, I wanted to incorporate them in my own photos. I ordered a cheap (but hopefully good enough) neutral density filter (still waiting for it to arrive), so I can’t do the long exposure unless it’s a very specific window after dusk or before dawn, so fog is the most appealing of the above possibilities. Unfortunately, we get almost no fog around here, except for the day after I started looking for some fog, so I was very lucky.

As soon as the fog rolled in, I grabbed my camera and drove around for hours, looking for some dramatic locations to shoot. The problem is that there aren’t that many dramatic structures near where I live, so I didn’t get many good shots. However, when coming back home, in the early morning, I did notice a park outside the city, covered in fog, not a soul in sight.

The park was lit by streetlamps, which produced a very nice effect in the fog, as if the whole area was in a forgotten place, out of this world: 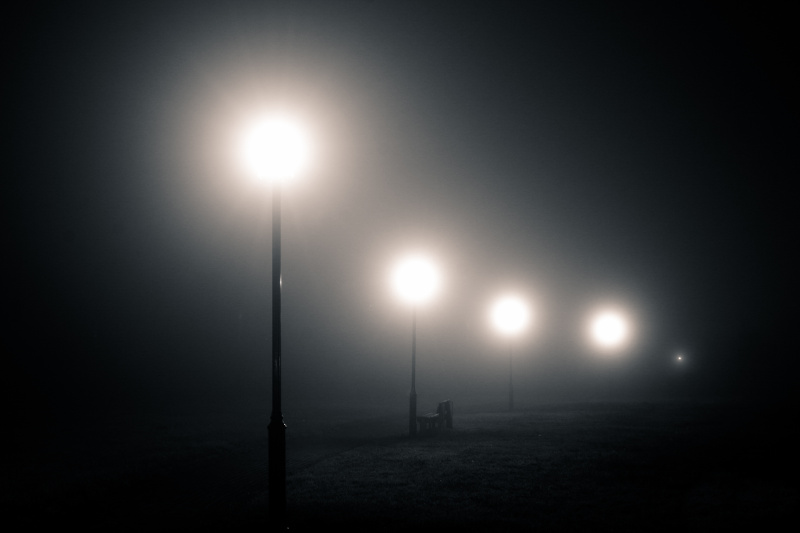 The effect here is very different from the one I intended, but I still like it a lot. The lamps are the main focus, but the bench keeps the photo from being boring. I like how they are arranged almost diagonally, due to perspective, but not exactly, adding interest to the photo and leading the eye to the small, far away, almost invisible lamp. Even though the effect isn’t close to what I wanted to achieve, I think the feeling is.

One area I think I need much improvement in is postprocessing. I do minimal postprocessing, and I think it shows, since photos by more experienced photographers (like Moore) are visibly more thought-out and intentional. Hopefully I’ll get there, in time.

A few days later, on a trip to the beach house (yes, it’s autumn, but the beach is still pleasant), I came across a beautiful breakwater. What I liked about it was that it wasn’t connected to the shore, which would really ruin the effect of solitude, so I climbed down a cliff face and took this long-exposure photo: 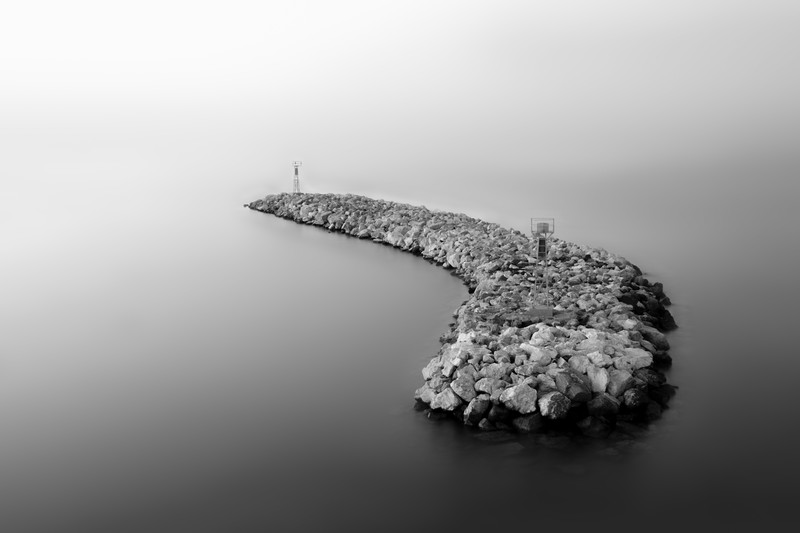 I am much happier with this photo, as it is much closer to what I want to achieve. The subject isn’t terribly interesting, but the fact that it’s surrounded by the sea makes it easy to isolate and helps produce the intended effect. For this photo, I blurred out all the high-frequency detail in the sea, horizon and sky, and masked only the breakwater in.

I’m very happy with it in general, but there are some problem areas I couldn’t fix, like the uneven tones around the edges. This is an artifact of the blur mask, and I’m going to revisit it after I get better at Photoshop. If anyone has any feedback on how to make it look better, please let me know.

What I like about the whole process is that I learn one or two new things every time I shoot, and I can really see myself improve. There’s a long way to go yet, but I’m very happy with these two photos. I went from liking the photos I took a lot, to not liking any of them at all, to somewhat liking them again. I hope this means I’m moving up in the stages of competence, although I think five months are a bit early for conscious competence.

As always, I’d very much appreciate your feedback, especially if you’ve shot this sort of thing before. Thanks!